The chestnut tree is a powerful and majestic tree with great development, reaching up to 30 meters in height.

The botanical name of the chestnut , " castanea ", comes from Castanis, an ancient city located in Turkey. Native to Asia Minor, this fruit species was introduced into the Cévennes by the Romans. Its rapid growth associated with its capacity to make rejects ; in other words to regrow after cutting allowing a regeneration of the forest at a high rate.

Why does EcoTree plant chestnut trees?

Chestnut trees are large-diameter trees which, as they evolve over time, have many cavities that can accommodate a diversity of wild fauna (insects, small mammals, cave birds or even bats).

The straight trunk of the chestnut ( Castanea sativa ) has a bark cracked in length and a dark brown color.
Its deciduous leaves are alternate, about twenty centimeters long, stalked, leathery and with large pointed teeth. In autumn, its foliage turns a pretty yellow color, which quickly turns brown.
As with oak and beech , two trees of the same family, chestnut leaves remain on the tree for part of the winter.

This plant does not bloom until after about twenty years , giving in summer male flowers in yellow catkins, erect of 10-15 centimeters and small female flowers , at the base of kittens .

Its fruits are formed from a bug with many flexible thorns and which contains two to three chestnuts . Chestnuts are edible and are the subject of delicious cooking recipes. In the past, they constituted a good part of the rural diet , mainly in winter. 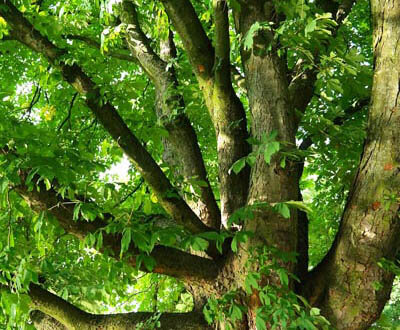 The preferred climatic zone of this tree is between 400 and 800 meters above sea level. It does not like too calcareous , compact or very humid soils.
It needs a location in partial shade or in the sun in deep, well-drained, slightly acidic soil .
The chestnut tree needs to be well established to withstand very harsh winters .

The chestnut wood is waterproof and elastic and is used to make stakes, floors, barrels, but also particle board, pulp and furniture.
Its natural resistance to parasites , dry wood insects , wear and tear of time and bad weather makes it a wood perfectly suited for exterior cladding such as cladding and roof coverings.
Of all the woods , the chestnut is particularly pleasant to work . Both hard and malleable, its wood allows quality and varied work.

The chestnut ( Castenea sativa ), of the Fagaceae family, was nicknamed "acorn of Zeus" among the Greeks. Among the Celts, the chestnut was considered the guardian of men and animals until the new year. This year for Father's Day , surprise your Dad with a original and ecological gift : give him a chestnut as strong and reassuring as him!