Why we’re installing birdhouses in forests 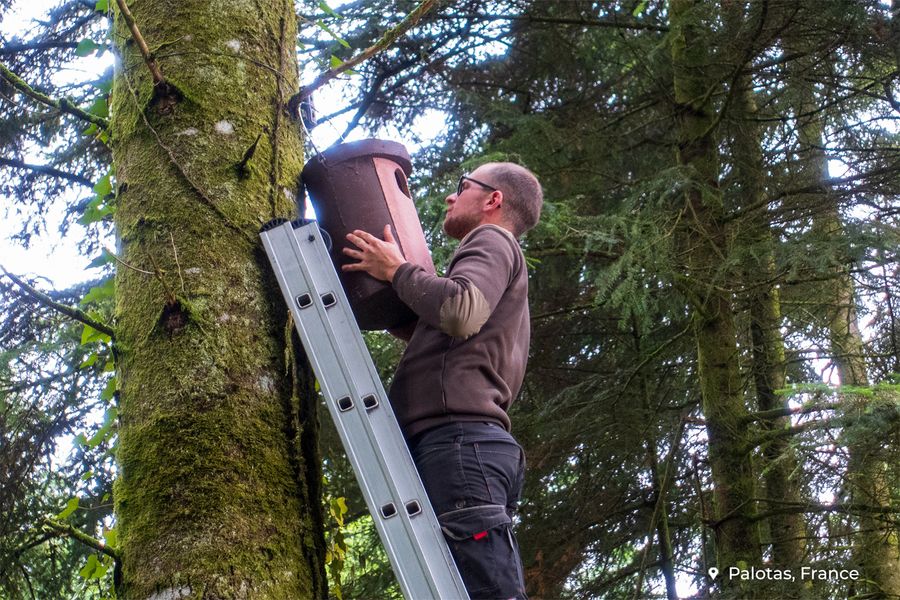 Our feathered friends need a little help, so we’ve started installing tailor-made birdhouses in some of our forests.

You might think it strange, but we are installing birdhouses in some of our forests. Sure, birds are pretty good at finding somewhere to nest and shelter – they’re the experts! But what happens if we give nature a little helping hand?

The idea that we might need to put nesting boxes in our forests may surprise many people. Unfortunately, there is a problem to solve.

In France, over the last 30 years, around one third of all birds have disappeared in agricultural environments. In total, around 275 bird species are threatened with extinction and 32% of nesting birds are endangered. The beautiful tree sparrow, for example, has almost disappeared from Western Europe.

This has all been caused by a combination of factors, including:

Some EcoTree forests have only recently been reforested, which means the trees are not yet big enough for birds to nest in. We’ve also found that there are not enough hollow trees for birds that need cave-like shelters. In specific EcoTree forests, such as Gioux and Palotas in Limousin, we know that there are certain species that should be living there.

And that’s why we’re installing birdhouses. We want to protect endangered bird species and make sure our forests are in great shape for them to return. Our nesting boxes will go on large trees at the edge of plots or on poles to encourage birds to settle and add to the rich biodiversity of the woodland.

Which birdhouses do we install?

Our birdhouses or nest boxes are small and suitable for different bird species. Before we choose which houses to install, we study the forest and local environment to assess which birds are likely to settle. Two things we always look out for are the direction of prevailing winds and the position of the sun. We know that birds do not settle anywhere. Some need to be high up to avoid predators or near the ground where they find food. The flight hole needs to be in the right place and sized appropriately for each species.

Speaking of which – let’s take you through the different types of boxes we use for each bird.

Robins are passerines that feed on insects and small creatures, especially beetles, snails, worms and spiders. They are often confused with the chaffinch, the peony bullfinch, the white wheatear and the melodious linnet.

Robins likes to hunt in the undergrowth and in winter feed on berries and small fruits. They forage on the ground and live alone. To nest, robins like frames or hollow trees, so long as they are high up and well hidden. So that’s exactly where we put their nesting boxes.

Nesting boxes for the Tengmalm owl and Eurasian pygmy owl

The Tengmalm’s owl and Eurasian pygmy owl are small raptors that both belong to the Strigidae family.

The Eurasian pygmy owl is the smallest owl in Europe and lives mainly in coniferous forests and high mountain mixed forests. Its nesting sites are often surrounded by wetlands near groves of spruces, which is why our forests on the Millevaches plateau are an ideal home.

It is active at dawn, dusk and even during the day, feeding on small mammals, mice, shrews and voles. It also eats fish or insects, lizards and bats, and even small birds, such as flycatchers, warblers, thrushes or stone-busting grosbeaks.

Tengmalm's owl enjoys spruce forests but also mixed woodlands that feature pines, birches and poplars where conifers are dominant. It is happy to adopt and live in very young plantations and secondary woodlands that have nesting boxes installed.

Tengmalm's owl feeds mainly on small mammals and normally nests in a tree hole often previously home to a black woodpecker. It’s a species threatened by disappearing and modified habitats as a result of brutal logging, but also developments for tourism and sports infrastructures.

Birdhouses are essential to help the Tengmalm's owl re-establish itself in calm and peaceful forests.

Woodpeckers vary in size and are well-adapted to life in the forest – they can be as small as a sparrow and as big as a crow. The long-tailed woodpecker’s plumage is black and white with red on its belly and the top of its skull.

It likes to live in old trees. The woodpecker drills its nest in the cavity of a trunk or the dead branch of an ageing leafy tree more than five meters high. These are the conditions we have in mind when choosing where to put our nesting boxes.

In our Gioux and Palotas forests, we have birdhouses for the blue tit, great tit and crested tit – all three are passerines.

The great tit is the largest of the three birds. It likes deciduous woods, particularly oak groves and has no problem sharing its territory. During breeding season, the great tit looks out for caves or cave-like places to live, which means they rather enjoy a nesting box.

Blue tits have similar habits and often take shelter in ivy at night. Like the great tit, they form groups with other birds to get food and seek out cavernous places to nest. They can sometimes get trapped in hollow posts, so our birdhouses offer an appropriate and safe place for shelter.

Finally, the crested tit lives in coniferous forests but also visits cork oak forests in Spain. A sedentary bird typically sets up its nest in a hole in rotten wood. In young forests like some of ours, there is a lack of old wood for them to shelter, so the nesting boxes do the trick instead.

Nesting boxes for the Eurasian nuthatch

The Eurasian nuthatch is essentially a forest bird. It likes deciduous forests, especially old oak groves, but mixed forests are also suitable. Very agile and active in trees, along with chickadees, it helps rid forests of pine and oak processionary caterpillars, budworms and other folivorous pests.

As this nuthatch searches out cavernous places to nest, it’s more than happy to find and settle in one of our birdhouses.

Nesting boxes for the short-toed treecreeper

The short-toed treecreeper is well-adapted to forest life. It behaves much like the woodpecker and appreciates oak groves and riverine forests. It’s a common bird often tempted by the tasty food left out for it by us humans. However, it needs to nest in old trees, which is why we’re providing nest boxes for this treecreeper in our young forests.

Bats are the world’s only flying mammal. They sometimes get a bad reputation and have been threatened and mistreated. However, bats play an essential role in biodiversity, especially in forest ecosystems. The good news is they love to nest in boxes, so we can install some new housing just for them.

Where we get our nesting boxes from

Our forests in France all use nesting boxes from Ligue pour la Protection des Oiseaux (LPO) – the Bird Protection League. It’s an organisation that’s been working to observe and protect birds in French forests for more than a century.

We put a great deal of thought into how and where we install nesting boxes. Our team has worked with specialists to make sure we’re giving the birds in our forests every chance of finding somewhere to nest and shelter. Fingers crossed, our feathered friends will enjoy their time and stay for good.