About komodo dragons and… a lot of twins: meet the international EcoTree team

EcoTree puts forestry in everyone’s hands since 2019! Our International office turned one year old in September. Curious to meet the team? Read their stories.

EcoTree went international one year ago in September: yay! If you’re as curious as we are, you probably want to know who those people are, sitting in Copenhagen and working on a mission to get everyone involved into European forestry. So let’s introduce ourselves! 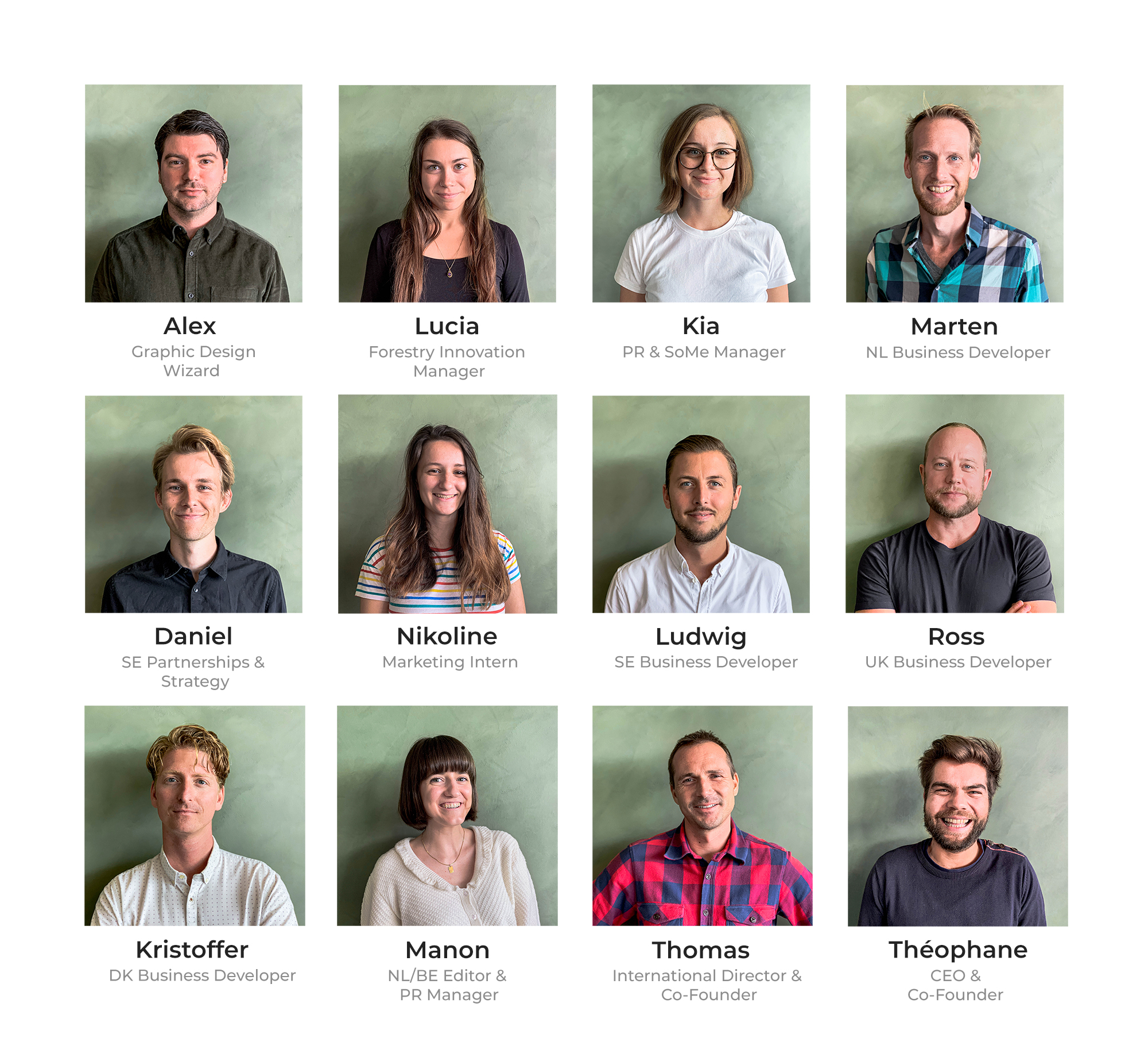 Alex moved from Romania to Copenhagen to study Brand Design at KEA. Luckily for us, he fell in love with the city and decided to stay. Alex is in charge of our visual branding: he creates all of our beautiful illustrations and animations and he played a big part in designing our new website. Alex spends his after-work time drawing, painting, playing guitar (don’t ask how many he’s got) or doing street photography.

Lucia is our scientific expert on ecosystem biodiversity and sustainability. She’s in charge of the technical aspects of EcoTree’s innovation projects. Originally from Italy, Lucia studied in Aarhus and moved to Copenhagen. If Lucia reminds you of an elf, it could be because she might have been an elf in a past life. She loves herbal medicine, self-sufficiency and folk music, and you’ll probably find her picking berries or wandering second-hand bookstores in her free time. Oh, and if you need board game tips, Lucia is your go-to person!

Kia’s last name is Eg, which means Oak in Danish - so she basically has trees in her blood! And of course, she’s the proud owner of a sessile oak tree. Kia is in charge of our PR and social media so if you contact us through email, LinkedIn, Instagram or Facebook, you will get in touch with her! Kia’s lived in Norway, Tanzania, New Zealand and Denmark. She’s been horseback riding since she was 3, but as a real Dane she also loves riding her bike (everywhere, no matter the weather) and she likes to spend her free time outside, camping in the forest and hiking.

Marten was born in Curaçao and raised in the Netherlands. He lived in Tanzania and is now living in Denmark with his Danish girlfriend and their son. Marten is in charge of developing new business opportunities on the Dutch market, and you can reach him on marten@ecotree.green. Before working for EcoTree, Marten (who’s an engineer) had his own business providing safe water to people in several African countries. Fun fact: when he was a kid he fell down several meters when demonstrating how strong his treehouse was (this was before he became an engineer).

Daniel is Swedish, he was raised in Dubai and moved to Copenhagen to study in September 2019. He is working on our Swedish partnerships and strategy. At the age of 8, Daniel got chased by a komodo dragon in the jungle of Sri Lanka. Luckily his feelings about nature have changed. This year he walked around 200 km in Northern Sweden with his brother and father. If you contact us in Swedish on Facebook or Instagram, Daniel will answer you, so come and say hi!

Like EcoTree, Nikoline has roots in Brittany (France) and Denmark, and she initially moved here for an exchange semester. Nikoline is our marketing intern and she’s always brimming with new, creative ideas so she helps out in many different fields. Fun fact: Nikoline learned to walk by holding on to trees in Morbihan (where you can now own trees by the way). She loves animation, reading and getting to cycle everywhere in Copenhagen.

Ludwig is from Northern Sweden where he basically grew up in the forest. He has a great skill set in client meetings, where he can melt the most ‘icy hearts’ with his easy-going Northern charm. His favourite food is surströmming (a lightly-salted fermented Baltic Sea herring, which we hope he'll never bring to the office). Last but not least, Ludwig claims to be unbeatable in all kinds of music quizzes - and we can’t wait to see it ourselves. Contact Ludwig here: ludwig@ecotree.green

Before joining us, Ross did political and humanitarian work and has lived and worked across half the planet, including: Afghanistan, Australia, Ethiopia, Kenya, Lebanon, Liberia, Mali, Myanmar, Nigeria, Senegal, South Sudan (are you still with us?), Somalia, Syria, Tunisia, Turkey, Uganda and Ukraine, the US and, of course, the UK. Fun fact: if you think you’ve met Ross on the street, you can’t be 100% sure that it was actually him. It might have been his identical twin brother who’s not born the same day as Ross - yep, our brains are going crazy about this as well! Catch Ross here: ross@ecotree.green

When Kristoffer is not out in the woods picking mushrooms for his famous mushroom-toast, you can find him sailing or on the tennis court. Kris is working on growing our Danish market and you can contact him here: kris@ecotree.green. Kristoffer has a twin brother, and they look so much alike that they have been making some serious pranks with their family and friends. We haven't met his twin brother yet (or at least... not that we know of?), but we look forward to having the pleasure of two Kristoffers.

Manon moved from Belgium to Copenhagen in 2018 because she fell in love with Scandinavia. Manon’s officially a philosopher and she’s a great writer as well, so she’s in charge of updating our Dutch website and helping us grow in the Dutch speaking countries. Her 3 favourite things in the world are cuddling dogs, swimming in the sea and eating tiramisu (but she’s a tiramisu expert so she’s very picky). If you contact us in Dutch on Instagram, Facebook or through email, Manon will answer you, so come and say ‘hallo!’

You can’t get much more international than Thomas. Half French, half Austrian, grown up in Paris, married to a Dane, and having children born in Switzerland, Hong Kong and eventually Denmark. He’s practically been an entrepreneur for his whole career and is now leading the team in Copenhagen. Although he got lost in the Austrian woods once as a child and swore to never set foot in a forest again, Thomas really loves nature, especially the mountains.

Being one quarter Danish, Theo moved from France to Denmark to start the international branch of EcoTree (get it - branch?). Théo is in charge of EcoTree’s external relations and thanks to his legal background, he’s also an expert on regulations. When he was six, Théo was fed up with schoolwork and he held a strike with his classmates. These days he loves his job, but will still enjoy taking a break every now and then (with or without a beer).