The Silver fir is a tree present in all our mountains where it forms, with the beech, a typical level of vegetation.

The genus Abies is found throughout the northern hemisphere with more than 40 species. The silver or white fir ( Abies alba ) is the main resinous species of the mountain range of central and southern Europe. About 70% of silver fir trees grow between 600 m and 1,200 m in altitude.

Why does EcoTree plant Silver firs?

The Silver Fir is resistant to wind and cold. Furthermore, it is indifferent to the chemical richness of the soil. This species also has two other advantages: it is a thermophilic essence that has the ability to germinate with 1% light and it is widely distributed to ensure its renewal.
In addition, the Silver Fir is a honey plant that does not produce nectar, but honeydew. A substance rich in sugar, with little water. Bees use it in addition to pollen to produce honey rich in mineral salts. It is essential for bees and therefore for all biodiversity, and is therefore planted by EcoTree.

It is the tallest European tree and its trunk can reach 2 m in diameter. Its trunk is straight and its branches horizontal. Its bark is smooth, silvery grey, has small pockets of resin, then cracks with age. Its leaves are dark green coloured needles above and are marked by a strong midrib below, separating two silvery white bands. The male flowers, located under the twigs, are small, bright yellow conical catkins. Whereas its female flowers, which will form cones, are green and arise at the top of the twigs. Its taproots adapt to relatively wet and heavy soils, which they stabilize. They make fir a species much less vulnerable to uprooting by wind than spruce.
This species is no longer used too much as a Christmas tree because of its sensitivity to spring frost and the fact that the twigs are not as thick as those of the Nordmann fir. 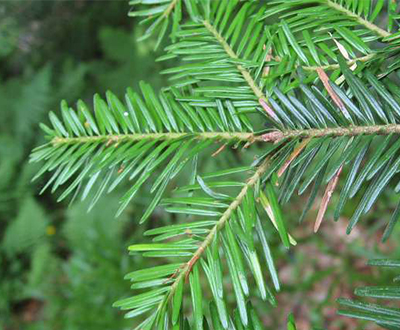 Thermophilic essence, the fir is after the yew the most shade tolerant species. A fir seed germinates with barely 1% daylight. Subjected to competition from dominant trees, a young Silver fir tree can put its growth on hold for 100 to 200 years while waiting for more favourable conditions. Sensitive to early and late frosts, this tree is also sensitive to drought.

The silver fir wood is slightly pinkish white and much appreciated for making frames and joinery products. The fir's wood is however often shunned in favor of the spruce, considered to be of lower quality. However, it has excellent technological qualities and several advantages over spruce. Its ease of impregnation, its good durability and its weather resistance make it suitable for use in environments exposed to humidity, such as in hydraulic and underground construction, for glulam, windows. or saunas.

The flowers of the fir indicate the elevation of the spirit, the spiritual ideal. This evergreen tree is a messenger who encourages us to continue on our way, to endure the problems of existence as its branches support the frozen point of the snow. The tree represents the energy of resistance and the light of hope , which it gives to those who know how to capture them. It is therefore the ideal gift, good luck gift , to wish courage and strength but above all in order to insist on never giving up halfway regardless of the obstacles.

Offer a tree to materialize your wishes of encouragement , offer a Silver fir! An ecological lucky charm !