In the wild, Larix decidua , the European larch, can reach 30 to 40 meters in height. Also called Common Larch, it belongs to the Pinaceae Family. It is one of the few conifers that become bare in winter.

Why does EcoTree plant Larches?

While other species have more important requirements, larch is a pioneer species which grows on poor soils that it helps enrich . This is why EcoTree plants European larches in the poor soils of some forests. Its good wind resistance makes it an ideal tree in windy regions such as Brittany and Limousin. 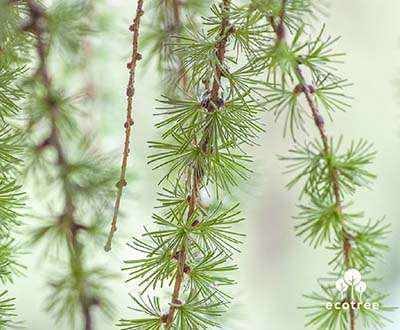 Larix decidua is a distinct variety from the Larix species, and the most common in our regions. It owes its vernacular name of European Larch or Common Larch to the word “mel” meaning honey in the language of the Dauphinois, where it particularly thrives. So much so that it is also commonly called Pin de Briançon. Its natural distribution area in France is located mainly in Briançonnais, Queyras, Ubaye, Dévoluy and Mercantour.

This conifer, a member of the Pinaceae family, like cedar , spruce , pine or the fir , is an exception among its kind. It loses its needles in autumn, which turn yellow, red and brown before dropping. It is the only European conifer to have this particularity.

It is by the fall of its needles that it favors the formation of a humus favorable to the reception of the seeds of other conifers.

In adulthood, it reaches a height of 30 to 40 meters. Its bark is greyish, cracked, and very thick on old subjects.

The needles are somewhat leathery, inserted in a rosette on the branches short or separately on the twigs long . They are concentrated in tufts composed of 35 to 40 needles along the twigs.

species , it is at the end of spring that the kittens appear. Males can be recognized by their yellow color. They are small, numerous and hang below the branches. They distribute their pollen with the wind and the insects that will pollinate the female kittens. Fewer in number, these are a little larger, bright red in color, and facing the sky.

The cones are ovoid, brown, and measure 3 to 4 cm. Their fine, pointed scales protect the brown, shiny, winged seeds, which they release at the end of summer. They remain attached to the branches for a long time, and it is not uncommon to observe cones from the current year and the previous year at the same time. Squirrels, woodpeckers or crossbills favor their dispersal.

Slow growing tree, it takes 20 to 30 years to reach a height of 3 to 4 meters. Its port is conical, narrow and its drooping branches, like those of spruce.

This pioneer species to grows on soil poor that enriches . Its largest natural formations are located in Central Europe. In the Alps, it grows between 1400 and 2400 meters.

In its natural state, on the adret (sunny side), it is found below 1400 meters in the company of Scots pine , and on the ubac it accompanies stone pine and spruce above 2000 meters. It is still found in the company of rowan or country maple. This mountain species was however planted in the plains to take advantage of its wood and its ability to enrich poor soils. This tree is very resistant to cold and can be acclimatized to a high rainfall, as well as a lesser. However, it does not support compact and hydromorphic soils which facilitate its infestation by larch canker. It does not support summer droughts quite well, but tolerates very high temperature variations, up to 50 ° in the same day, in its natural mountain range.
Its deep and highly developed root system fixes it firmly to the ground. It therefore needs deep soil to be able to settle there completely.

It thus has exceptional wind resistance, so much so that windfall is very rarely deplored in larch trees.

This tree is sometimes called the oak of the mountain, because of the exceptional wood it produces. The fruit of slow growth, it is the most durable and solid of the coniferous woods.
Rot-proof, it is used for the design of boats, for frames, roof shingles, railway ties.
Larch also has good medicinal properties thanks to its needles. The manna of Briançon, fruit of the seepage of the larch needle, is used to increase the white blood cells, and the resin of the tree, the turpentine of Venice, has an antiseptic power.

Whatever the season, larch is an elegant tree. It symbolizes maternal love, because it very often offers food and shelter to squirrels, and birds often shelter there. Because of its impermeable bark, the - owl appreciates it to house.

The European larch is therefore the original gift for Mother's Day : a gift that embellishes every year! Here is an original and ecological Mother's Day gift idea.

What if, this year, you gave him a bouquet of trees in a beautiful forest?