7 things you probably didn’t know about the forest 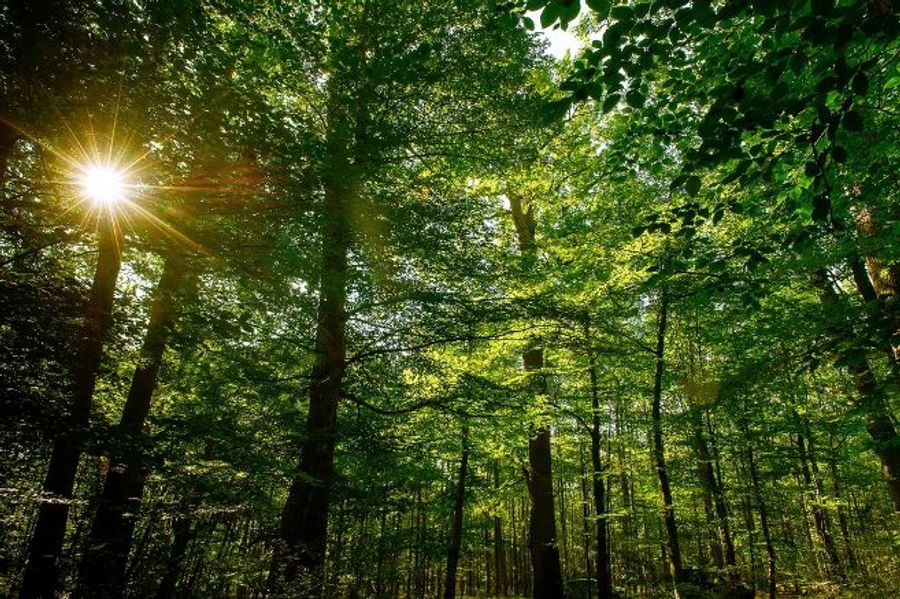 Forests are truly magical places. They enrich our lives in so many ways without us even noticing it. How much do you know about the forest?

1. The forest absorbs about 30% of our annual carbon emissions.

While much CO2 ends up in the ocean and the atmosphere. It is estimated that the forests capture about 30% of the annual carbon emissions. It is therefore worrisome that a forest area the size of Belgium disappear every year! Deforestation is estimated to be responsible for 17% of the global greenhouse gas emissions. Reforestation has, therefore, become the centre of attention when we talk about fighting climate change and staying below the 1.5 degrees Celcius level outlined in the Paris Agreement.

2. 80% of terrestrial species live in the forest

You might have heard Greta Thunberg say it in her speech: We have entered the 6th mass extinction. Species are becoming extinct 100 times faster than they would without human impact. The forest is a large contributor to the wellbeing and existence of the countless animal species. As a matter of fact, 80% of all terrestrial species live in the forests. It is therefore important to think about biodiversity when we engage in reforestation as well. This can be done by applying a forestry management plan that is “close to nature”. Such an approach implies growing forests with uneven-aged trees, mixed species, and refraining from using chemicals.

3. Wood both has economic and ecological value

What happens when trees absorb CO2? The carbon is stored and locked-up in the wood. As a matter of fact, 50% of the trunk of a tree consists of sequestered carbon. When a tree reaches maturity and is cut, it might be used as energy wood or as a raw material. When wood is used as a raw material in the production of furniture or construction the carbon is stored for a long time period. When we use wood in construction it both serves as a sustainable substitute to other raw materials (e.g. cement), but it also stores the carbon for decades or even centuries in some cases. As wood is a valuable raw material it also has a financial value. A tree grows on average 2% per year and its value increase approximately at the same pace. If you invest in a tree today by becoming the owner you will have an expected yearly return of 2% per year.

4. Trees filter the air we breathe and keep us cool

Trees have more than just an aesthetical purpose in cities. They both contribute to cooling down the air and cleaning it. Air pollutants (i.e. particulate matter) are removed by plants through a process known as dry deposition. A study made by US-based, The Nature Conservancy, showed that the particulate matter (PM) in the air surrounding trees was reduced by 7-24%. PM is dangerous to people as it enters the lungs. It is estimated that PM will cause the death of 6.2 million people yearly through to 2050. Planting trees in the city with its filtering effect can thus make us more healthy. The study furthermore highlights how trees also contribute to cooling down the air through transpirative cooling (by transpiring water as they grow) and the shading effect. When you find yourself in the midst of a heatwave on a busy summer day in a large capital city like Paris, a tree in a parc is likely to become your best friend.

5. Nature is a medical prescription

Since October 2018, nature has become a medical prescription that doctors in Scotland can use for patients suffering from mental illness, diabetes, heart disease, stress and other conditions. The patients will be given a calendar and overview of the forest and nature walks suggested by the society for the Protection of birds. A study has shown that walking in nature lowers levels of remuneration and reduces the neural activity in an area of the brain linked to risk of mental illness, compared to people that aren’t exposed to nature. With Rising urbanization and lower exposure to nature, it might be worth considering going for a walk in the woods once in a while.

6. We are more detached from nature than ever before

We are more detached from nature than ever before with rising urbanization. Today approximately 50% of the world’s population live in the city and we expect that number to grow to 70% by 2050. In an article by the Guardian, George Monbiot underscores how this generation’s separation from nature might be one of the biggest threats to nature. In one generation the proportion of children regularly playing in wild places in the UK has decreased from more than half to fewer than one in 10. In the US, during only six years (1997-2003) children with particular outdoor hobbies fell by 50%. In addition, today children in Britain aged 11-15 spend about half their waking hours in front of a screen. This separation from nature is scary because it makes it easier for us to ignore that our nature and ecosystems are in danger as Monbiot, highlights in his article.

7. You can become a tree owner

There are many great companies and organization that are involved in reforestation. Most are based on a philanthropic model where you can donate and support reforestation projects. However, with EcoTree it is possible to become a tree owner. This way your eco-friendly gesture becomes an investment that both has economic and ecological value. If you are looking for an alternative gift for the birthday party of a good friend, you could consider an oak tree this year.

Sustainable management
All our forests are insured, certified, and sustainably managed.

Learn everything
about forests!

Learn everything
about forests!

Go green with the EcoTree newsletter! News and stories from your forests, updates about EcoTree... You have it all!